5 Books that Rocked My Theology

The NuDunkers are busy folks this summer. We have had conferences, pilgrimages, vacations, and piles of work that waiting to be completed. With all these events going on a typical Hangout is difficult to pull off. So, I suggested we start a series of blog posts that could go up at any time discussing the 5 books that rocked our theological world.

Now, I am regretting that suggestion! At the time it sounded easy enough, but clearly keeping it to 5 books is nearly impossible. So I finally decided to leave out the articles and essays that have been central to my thinking. I also chose to avoid two key authors– Thomas Merton and Henri Nouwen. I just could not pick a book each from these two men that would get to the significant role they have played in my theological reflection and spiritual life. In fact, I credit Merton and Nouwen for opening my eyes to the wider history of the church– a perspective that ultimately led to a PhD in Early Christian History.

So, now for the list. They are listed in alphabetical order by title so I can avoid having to make the even harder choice of trying to order them by influence!

After Christendom by Stanley Hauerwas

This was my first and only read of anything by Hauerwas. I first read it in Jeff Bach’s “Brethren Beliefs and Practices” class at Bethany Theological Seminary. That spring term I was also taking my introduction to Latin and felt like I wasn’t giving my reading the attention it needed. But when I opened After Christendom and saw that famed phrase– Outside of the Church there is no salvation– I knew I had to read closer. I hadn’t read any Post-Liberal theology, and nor did I know much critical theory or of the likes of DeCerteau. But since then, I have read Lindbeck, MacIntyre, DeCerteau and Charles Taylor, all of whom play significant roles in the argument of After Christendom. So, nearly ten years after first reading the book I find myself returning to it time and again, and nodding.

After Christendom finally gave me the frame to talk about how Enlightenment thinking has tried to supplant a rich theology of being the church. It also grounded a key theme in my own scholarly work– that of formative practices within Christian community. In my church work, his argument against a Christendom imaginary (to use Taylor’s later phrase) that has so defined the North American church. The link between these two parts of my writing is best summed up in Hauerwas’ phrase at the opening of After Christendom: “For the crucial divide in our time is not– as is often claimed– between modernity and postmodernity, but rather when the church is no longer able to shape the desires and habits of those who claim to be Christian.” (8)

Beyond his role in shaping my bibliography and argument, Hauerwas also kicked started a key conviction. I have often wondered how an Anglican ethicist could speak for my own tradition. After reading After Christendom I found myself asking where our (meaning Brethren) voices in the debate could be found. Clearly, Hauerwas knew of Anabaptism by working with John Howard Yoder, but if practices are so central to formation how could he effectively talk of the tradition from outside it’s way of life. I was convinced then, and continue to be so, that Brethren need to jump into the theological fray adding to and critiquing the Neo-Anabaptism rooted in Hauerwas.

A Black Theology of Liberation by James Cone

Cone is certainly a controversial theologian, and his Black Theology of Liberation was clearly one of the most provocative. White theologians around the US still shudder to read his noted assertion that if Jesus Christ is not black we must kill him. In the midst of a class on Liberation Theology, Cone’s words and antagonism grated on a number of my classmates, many of whom were ideological pacifists.

I took two things away from Cone’s work. First, I can remember sitting in the reading room finally realizing what a true systematic theology looked like. Cone’s argument progresses through a doctrine of God, to Christology, and to Ecclesiology. I don’t know what triggered it, but I finally understood how a whole theological system plays out within the various categories of thinking.

Second, though I did bristle as some of his more provocative phrases, I knew I could not reject his argument just because I didn’t like what appeared to be a clear call for violence. I knew, as an emerging white theologian, I had to come to terms with how some theological tenants I had come to accept were in fact based in privilege. As I turned each page I knew I had to keep learning from Cone in order to hear how white thinking is engrained in the church. I had to hear how race experience in the US was formative of both black and whites, and come to think critically about how power is either claimed or rejected in light of those experiences. Cone clearly challenged me to think beyond “just theology” and recognize how power and privilege are too easily overlooked. 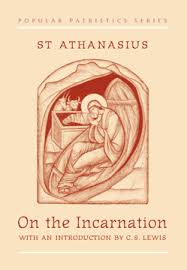 On the Incarnation of the Word by Athanasius of Alexandria

Given that my academic work is based in the fourth and fifth centuries I should comment on a book written in that period of time. Interestingly though, I do not go back to the works of Cassian (on whom I am writing my disseration), nor the desert monks of Egypt. Those works have certainly been formative for my thinking, but it was Athanasius’ treatise that finally sealed the deal in my Christology and its connection to Theosis in my thinking. Athanasius, though known as a politically savvy rhetorician, also spoke of the key to the Incarnation of the Word being God’s desire that we would return to God. In Athanasius’ words, “the Word become human so that humanity could become divine.” For us Protestants such a phrase seems nearly blasphemous, but I found it a beautiful way to link salvation and Christology in a way that countered our current popular understandings of atonement.

Athanasius was, then, for me the turning point in my thinking regarding the creeds. Though I often had said I could recite the creeds in general without much contradiction, I finally understood and accepted the classical orthodoxy of those statements of belief. In short, the statements of Nicea and Chalcedon finally made sense. Saying that Jesus is one with the Father, begotten not made, and that the human and divine were united in Christ without mixture or confusion aren’t just matters of historical story telling. They are now, for me, central components of my theology.

It would not be a stretch to say that this book was part of my own decision to head to Candler School of Theology to finish my Mdiv. I was getting a bit restless at Bethany after having completed an MA and beginning again with the Mdiv. One mentor asked me where I would go to study for my PhD, and immediately I thought of Emory, where both LTJ and Bondi were teaching. I was in a seminar with LTJ the spring my son was born, and I went to his office to discuss the things I needed to do in order to prepare for doctoral work. I will say that neither was easy. In less articulate words, he kicked my butt. Yet, I look back to those months with LTJ as formative for my work and understanding. At the end of the day it is difficult for me to unlink Scripture and Discernment from my personal experiences of LTJ, for both were clear turning points in my thinking and work.

In Scripture and Discernment Johnson studies the council narratives in the book of Acts. He explores how testimony and scripture were interwoven in the discernment of the first Christians. In a way, the church came to new understandings of old texts through the accounts of how Paul and Peter had experienced the working of the Holy Spirit. In a way, LTJ’s account of the church’s practice of discernment avoids the dichotomy between truth and experience. What is more, the church clearly plays a key role in testing these experiences and ultimately came out with a different, yet shared, understanding of the meaning of scripture. Though Johnson is Catholic, I found his account to speak to a rich theology of both the church (as in Anabaptism) and the Holy Spirit (as in Pietism). I still turn to Scripture and Discernment as a way to hold up church, Spirit, scripture, and experience as foundational elements of theology. They are not exclusive, but mutually informing.

The Way of the Pilgrim

I first read this Russian tale in a class during my undergrad at Manchester College (now University). Since the class was a January term, we were reading a book a night for two weeks. I certainly had skimmed the others, but this simple story was just too good to put down quickly.

The story is of a lay person who heard Paul’s admonition on I Thessalonians 5:7– to pray without ceasing– and went on a journey to find out how such a prayer was possible. He ended up in the cell of a hermit who gave him a set of beads. The instructions were simple– go off and pray the words of the Publican, “Lord Jesus, have mercy on me a sinner,” a certain number of times. Week after week the pilgrim took on the task, and week after week the hermit instructed him to pray this Jesus Prayer more times. Soon the pilgrim was waking up early and staying up late just to get in the required number of prayers. Finally, the hermit stopped and sent him a way. The pilgrim soon found that though the tasks were no longer required he missed the frequent prayer. What is more he found the words coming to his lips at any given moment, and especially when he touched the beads in his pocket.

The story is the tale of the Jesus Prayer, and was part of the Hesychist tradition in Orthodox theology. The central idea is that the prayer clams the mind and stills the heart. I loved the simplicity of the story, the tactile nature of praying with beads, and the idea that unceasing prayer is possible. Since reading that book I have sought out how Christian cultures understand Paul’s admonition. It opened the door to explore the Hours of Prayer, led me to the monastic traditions, and has in some way contributed to my academic work with Cassian. Cassian’s noted discussions of prayer in his Conferences looked at two key scriptures in my faith journey. The first is the I Thessalonians 5:7 text and the other is Matthew 5:7– blessed are the pure in heart for they will see God. In all my studies, these two scriptures surface again and again. As I look back, The Way of the Pilgrim was my first encounter with the practicality of unceasing prayer.

A list of just 5 books clearly does not do justice to the breadth of sources central to my thinking. Michele deCerteau, James K.A. Smith, Rowan Williams, Gregory of Nyssa, Richard Valantasis, Pierre Bourdieu, Patricia Cox Miller and Richard Rohr are often standards in all of my work. However, these books all arrived on my desk as a result of reading these 5. They simply set the course of my thinking and perspective, leading me into rich and plentiful fields of reading.